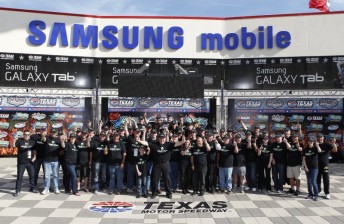 Speedcafe.com, in association with BAM Tours, has completed another successful tour to a NASCAR event in North America.

The group arrived in Dallas Texas on Wednesday of race week and was on the “rev limiter” for the next six days as it took in everything NASCAR has to offer and more.

The tour, which was hosted by BAM Tours owner and Australian motorsport identity Brett “Crusher” Murray, kicked of with a welcome dinner and drinks and then continued with a day of shopping and go-karting.

It was then to the track for three-days of Truck, Nationwide and Sprint Cup action.

The group had full pit access, finish-line grandstand seats, was invited to the exclusive pre-event party, attended the pre-race concert and was on hand for the driver introductions and pre-race grid festivities.

The group also had a private visit from Marcos Ambrose for an exclusive meet and greet.

“It is always great to see Australian fans out here and I know they always get looked after pretty well by ‘Crusher’ and the crew at BAM,” said Ambrose.

“It is amazing how many more Australian flags I am seeing in the stands.”

On Saturday the group was provided with VIP access to Victory Lane after Trevor Bayne’s win in the Nationwide race.

The group then had individual images taken with the main event’s cowboy hat trophy and the six guns presented to Tony Stewart after his win on Sunday.

It was then into a NASCAR for a high-speed ride on the 1.5-mile oval – racing side-by-side with 10 other cars.

On Monday the group visited the JFK Museum in downtown Dallas before being given a behind-the-scenes look at Cowboys Stadium, which is regarded as one of the best sporting arenas in the world.

The group consisted of all different age groups from across Australia, including eight-old Mitchell Thornton who joined his dad Jeremy.

The tour also included Rodney Woods from Melbourne who enjoyed his fourth trip to the US with BAM Tours.

“The great thing about the BAM Tours is that everything is taken care of and there is such personal attention to detail,” said Woods.

“The racing is always great, but all the added extras make it a real experience that you just won’t forget. There is always a surprise around the corner and that keeps it interesting.

“The trips are short and sharp which makes it great for people in their own businesses and you really get value for money.”

Speedcafe.com and BAM Tours are set to launch their first tour for 2012 next week – a NASCAR trip to Las Vegas in March – stayed tuned for details.