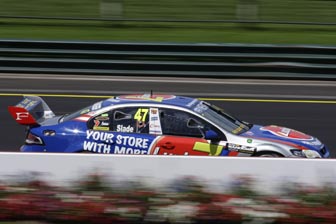 Tim Slade is not discounting his chances of taken a maiden V8 Supercars Championship race win at this weekend’s Norton 360 Sandown Challenge, following a strong showing in practice today.

The 26-year-old took his Lucky 7 Racing Falcon to the third fastest time of the day at the Melbourne circuit, beaten only by Ford Performance Racing duo Paul Dumbrell and Mark Winterbottom.

Slade has enjoyed several strong practice showings throughout the year, but sits just 12th in the points standings having failed to score a podium finish since his standout weekend at Queensland Raceway in August.

“We’ve really struggled since Queensland Raceway… we struggle on tracks where you need good front grip, but when we go to places like here, Queensland or Darwin, our car seems to be rather suited to it. Time Slade, one for the ladies ...

“The speed we’ve shown today is a testament to my guys, because we have had a fairly rough last few races, and we’ve had a few little niggling things hamper us throughout the races.

“The guys unpacked the truck here Tuesday morning, and they were here until 11 or 12 o’clock last night, triple-checking things and changing things for today.

“Hopefully we can translate this speed into a good qualifying position tomorrow and race on.”

Slade sees this weekend, which features 120km and 200km races on Saturday and Sunday respectively, as his best chance since Ipswich for achieving his first win.

“We’ve been close at Queensland Raceway this year, and if it was to come this weekend that’d be awesome,” said Slade of his winning chances.

“I think this is our best chance since Queensland Raceway – our car actually feels reasonably well on used tyres as well as new.

“Typically the SBR cars have been pretty good on their tyre life, so who knows.”