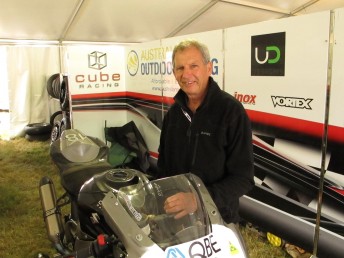 The late 1980s were a golden age when it came to professional motorbike racing in Australia. Wayne Gardner was winning the 500cc World title, Mick Doohan and Kevin Magee were on their way and like Robbie Phyllis, Tasmania’s Malcolm ‘Wally’ Campbell was dominating domestically.

Malcolm Campbell was a two time Australian Superbike Champion, he won the prestigious Castrol Six Hour event and the Swann International Series championship in 1983, he stood on the top step when bikes raced at Bathurst and won many other national and state championship titles.

Being a bike whizz and having had so much success, you would think that Campbell was obsessed over two wheels from the start. Not so.

“In my early days I lived on a farm and I used to play with billy-karts, I guess my interest, if there was any interest, was towards cars,” Malcolm Campbell explained to Speedcafe.com

“I remember when I was eight or 10 years old, listening to the radio commentary from Longford and the racing cars there.

“I went there a couple of times, but motorbikes didn’t come into my life until I was 16.

“I got one simply so I could ride on the road. In Tasmania you could get your learners license for a motor bike when we were 16.”

A quick convert, Campbell loved the freedom that came with owning a motorbike.

“You didn’t have to have mum or dad besides you, so it gave you freedom and mobility,” said Campbell.

“I started to get a bit more serious a further 18 months later.

“My mates had bikes and Symmons Plains would stage rider clinic days, which the Tasmanian Motorcycle Club would run in the late 60s, early 70s, as a safety thing and an introduction to racing.

“That’s how I got into racing.”

Campbell’s first race was one to forget, he fell off the bike twice on his first day of racing, but undeterred he kept at it. He spent several years involved in club racing competing in Tasmanian state events, before getting signed.

“It was a long journey, I reckon I would hold the age world record for getting signed up to a distributer team I reckon,” said Campbell.

“I used to do a lot of endurance races, like the Castrol Six hour and the Adelaide Three hour. You’d go off with a couple of bikes and a mechanic.

“That’s how I got noticed, in events like this. Rob and Val Watson where Honda Australia’s advertising managers, they also did the lap scoring at the Castrol Six Hour for the Honda team. They pushed to get me in there and I was 30 years old.

“Everyone’s retiring by 30 these days; I was a pretty old age when I signed, but still useful.”

Campbell was more than “useful”; he quickly turned into one of Australia’s best riders. In the mid to late-1980s he was one of the men to beat. He’d won the Castrol and New Zealand Six Hour races, several rounds of the Australian 500cc Grand Prix championship, Australian Production championships, Endurance titles, the Swann International Series and two Superbike titles. At the same time he was also looking at opportunities overseas.

“I did quite a bit of overseas racing for Honda,” said Campbell.

“I won an Australian Grand Prix which was not what we see today, that was at Bathurst; I won that a couple of times.

“I raced at the Malaysian Grand Prix before it was a world championship event and won several rounds of the World Super Bike championship here and in New Zealand.

“I also competed in Europe in the World Superbikes Championship off my own back. We had some fantastic results, including a couple of poles against the factory teams.

“In the end budget killed us.”

After finished ninth, 14th and 16th in the respective 1989 – 91 World Superbikes Championships – which were impressive results against the big overseas factory teams – Campbell retired in 1992.

“I didn’t want to retire but time comes along when they have to feed new riders into the system,” said Campbell.

“Troy Corser took over where I left off.

“I didn’t race for a couple of years, then came back into the Australian Supersport championship and raced through to 1998.

“Since then I’ve been talked into doing the historics – old motor bikes, old riders and old mechanics. What a recipe!” 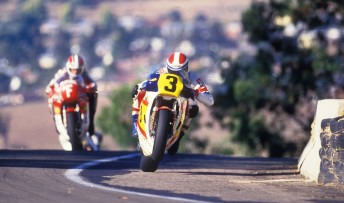 Campbell also has memories of racing at Bathurst. He won there in 1986, five years after hitting the wall at McPhillimey

“I wouldn’t do it today,” said Campbell on racing at Bathurst.

“My introductory meeting with Bathurst wasn’t good, that was 1981.

“I learnt what others have learned, I broke my femur and several other bones. It’s not a very forgiving place.”

One of the biggest world sporting events to hit Australia was the debut of the 500cc World Championship and its arrival at Phillip Island in 1989. Gardner had won the 1987 title and won the very first Australian race. The other local in that race was Campbell.

“It’s one of the best motor bike tracks in the world,” said Campbell.

“I didn’t last very long in that race. I’d come back from a Superbike race at Donnington where I badly injured my knee, I had to drain my knee daily, so I had limited practice and we were unfamiliar with the bike.

“We hadn’t tested it with a full tank of gas, which you need to get through to the end of a race.

“The front end bottomed out through turn one on the second lap, I had to run wide and ended in the mud.

“That was the end of the event for me, but it was great to be a part of.”

Following that race, Campbell had the opportunity to ride in the 500cc World Championship. He tested with Elf Honda, Team Gallina and Cabin Racing Honda.

“I had ambitions to race 500ccs,” said Campbell.

“It’s about being in the right place at the right time though. I had three opportunities, but they all shriveled up.

“It was pretty hard in those years, there was a lot of competition for a ride and there were plenty of guys that could have made it and didn’t, but it’s even harder today. You need a packet of cash now; I didn’t need that in my day.”

Despite this, Campbell doesn’t harbor any negative feeling towards the sport, he loved riding his bike and being a part of Australia’s golden era.

“The 1980s for motor bike racing in Australia, and around the world, were fantastic,” said Campbell. 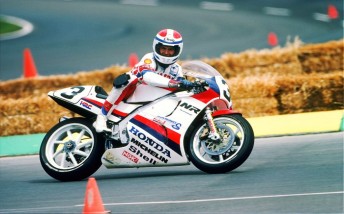 Malcolm Campbell is one of Australia's best motor bike racers

“There was a lot of money and good crowds. At the start of World Superbikes in 1987 there were 60 people competing for 40 starts. You had to work hard for it, but the ‘80s were fantastic.

“It’s just a shame to see the state we have got ourselves into today. How you fix it I do not know.”

Interestingly, Campbell doesn’t rattle off any individual results when asked about his career highlight. Like all forms of motor sport, a rider or a driver is part of a team, and they don’t taste success without a dedicated, professional combined effort.

“Some of my most enjoyable races were the endurance races,” said Campbell.

“I liked being a part of a bigger team and enjoying a good day together.

“You needed to have a good day at the office to take home the bacon in those races.

“In a sprint race, you’d go home after a race and the buzz was gone, in a team the event lingers on and you enjoy the good times together.

“If I have to pick something else, I suppose cracking pole a few times in Europe stand out.”

Campbell has no career regrets, he was happy with what he achieved and how he achieved it. In saying that, he acknowledges that things might have been different had he been raised on the Australian mainland as opposed to Tasmania.

“Tasmania is always a hard place to come from,” said Campbell.

“The big island is the next step, you’d see people like Wayne Gardner one step ahead, they’d be looking at Europe as the next step.

“It’s that Tasmanian mentality that mainland people are one step ahead.

“It’s hard to get in at that top level. I got my break with Honda Australia because someone said that they should check me out.

“Early on, coming from Tassie, there was no one here to say that they could take me places, give me that leading hand, help cut some corners and provide guidance.”

Now in his late 50’s, when most riders have stepped away from the bike, Campbell still races. In-fact he is racing this weekend in a historic race at Symmons Plains.

“Leopards don’t change their spots; Robbie and I are still butting heads.

“It doesn’t matter what bikes you are on, you’re trying to beat each other. It’s amazing to think that 25, 30 years down the track that we’re still finishing side by side.

“It’s a bit déjà vu like, but still pretty cool.”

He’s been racing for over forty years but Campbell is still as competitive as ever.

“I ride to win, this hasn’t changed,” said Campbell.

“Even today I’m still the same, if I think I have half a chance it’s not often I’d say let it slip, let it go away, be content.

“I’ve still got a bad streak in me, Robbie is the same, if he has the opportunity he’ll snaffle it up as well.

“We’re both fiery competitors, we’ve both still got a few tricks up our sleeves.”