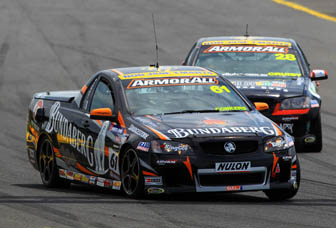 Cameron McConville has laid down the V8 Utes benchmark in the opening practice sessions at Sandown Raceway today.

McConville set the fastest combined practice time today at Round 7 of the Auto One V8 Ute Racing Series – protected by Armor All.

McConville’s Bundaberg Holden was the fastest V8 Ute in both sessions, with his best time a 1m25.02.

“I’ve been coming here for a long time. The first time I raced here was at the 1993 Sandown Challenge with John Bowe and Dick Johnson,” McConville said.

“I suppose I’ve lost count of how many times I’ve actually been coming here but I would definitely call this my home circuit along with Winton.

“I really enjoy this circuit; we come out here all the time for the HSV drive days, so I know my way around it really well. We are just going to try and go out there and finish the year on a high.”

Championship contender Ryal Harris claimed fourth fastest and will be looking to improve as he trails current series leader Chris Pither by 18 points in the ENZED Drivers Championship. Pither was sixth fastest for the combined sessions.

The surprise of the day was newcomer Kris Walton who posted a time of 1m25.88s to be fifth fastest.

All drivers will be vying for the Armor All Pole Award and $1000 cash when they take to the track for qualifying at 9:05am tomorrow followed by Race 1 at 12:15pm.

In the Vodka O Australian GT class, Tasmanian driver Greg Crick sent a strong message to his rivals by topping both of today’s practice sessions for the final round of the championship.

Crick, driving the JEEP sponsored Dodge Viper, was the only driver to break into to 1m12s bracket and said it was simply down to braking and lots of track experience.

“I was watching the other drivers and was really surprised how early they were braking, plus having done a million laps around this place I felt really comfortable in the car,” he said.

“This is a grunt track and I knew coming into the weekend we would be quick, but I am surprised I was the only driver in the 12’s.”

Klark Quinn, who currently sits in second place in the championship, suffered engine issues throughout both sessions, leaving the Queenslander with little track time before qualifying tomorrow.

A major incident in the first practice session involving Ash Samadi saw most of the field sitting in pit lane for 15 minutes while his Rocking Angel Mosler MT 900 GT3 was removed from Dandenong Corner, after destroying a brake disc and spinning to the infield.

Samadi’s team was able to fix the Mosler for Practice 2, however it took to the track with no rear body work meaning the car was very unstable in the rear.

Other cars including the Championship leading Audi R8 LMS of Mark Eddy spun on the brake fluid left by Samadi but no damage was recorded. He went on to finish fifth and third at the end of the day.

Tomorrow’s GT action will feature a 20 minute qualifying session, followed by the first of two 30 minute races at 2.40pm.