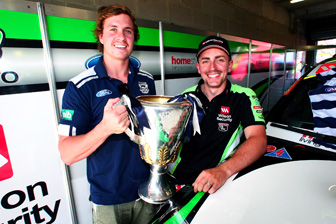 The #3 Ford Falcon driver was paid a visit by the AFL Premiership Cup – regarded as one of Australian sport’s greatest trophies.

Geelong Cats premiership player Mitch Duncan brought the Cup to Sandown, paying a visit to D’Alberto’s garage and allowing the Wilson Security team to touch and feel the great Cup.

A long-time Cats fan, D’Alberto was thrilled to hold the Premiership Cup.

“You see some trophies or Cups that are small or have no presence. This has presence.

“The Cats have won three of the past five AFL Grand Finals, and it’s always great to see the boys celebrating with the Cup. Now I can say I’ve held it too!”

D’Alberto finished third in the third practice session, but soon after, the team found a crack in the cross member, forcing a change.

The repair meant that D’Alberto was unable to compete in the fourth session.

It also meant that he could not take Duncan for a hot lap. Duncan slipped into the second Wilson Security car of Fujitsu V8 Series driver David Wall.

Duncan was suitably impressed with the experience.

“I’ve never been in a V8 Supercar before, and it was amazing,” he told Speedcafe.com.

“It was a shame that Tony’s car was not capable of taking me out, but David really looked after me and gave me a great experience.”