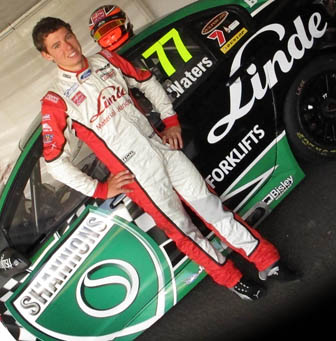 Linde Forklifts and Shannons Insurance will back Cameron Waters’ debut in the Fujitsu V8 Supercars Series with Kelly Racing at Sandown International Raceway in Melbourne, Victoria this weekend.

Linde is a long-time supporter of Waters and backed him in his title-winning campaign in this year’s Australian Formula Ford Championship.

Shannons sponsored the Shannons Supercar Showdown reality television series that saw Waters drive alongside Grant Denyer at this year’s Supercheap Auto Bathurst 1000, where the 17-year-old from Mildura became the youngest driver to compete in the Bathurst 1000.

Waters will again drive Kelly Racing’s chassis PE047, which he drove at Bathurst as the #77 Shannons/Mars Commodore. Just as at Bathurst, the entry will be overseen by experienced team manager Dean Orr.

The car, the same chassis that Rick Kelly drove to a pole position and race victory in Hamilton, New Zealand this year, will be known as the #77 Linde/Shannons Commodore at Sandown this weekend.

After completing the Formula Ford title last weekend in Tasmania, Waters is pleased to be back behind the wheel of a V8 Supercar.

“It’s awesome to get back in a Kelly Racing V8 Supercar,” said Waters.

“I’m really looking forward to it. I know the Sandown circuit pretty well. I raced here earlier this year in Formula Ford and was fairly quick so hopefully I can get out there and be reasonably competitive.

“This weekend will be totally different to Bathurst. This event will not be as stressful. I want to go out there and finish all the races and get as many laps as I can. It will be a good chance to see where I’m at in this field and get some more experience in a V8 Supercar.

“This is a one-off deal and I’ve really got to thank Linde Forklifts and Shannons Insurance for backing me to allow this to happen.

“Linde is a long-time supporter of mine and we won the Australian Formula Ford Championship with them this year and Shannons was behind the TV show and Bathurst entry, so I’m very thankful to both of those companies. I’ll be doing my best to represent them well this weekend at Sandown.”

Waters does not have a confirmed deal for next year, but said that he wants to be in the Fujitsu V8 Series.

“It’s great to get more laps in a V8 ahead of next year,” Waters said.

“Nothing is confirmed for next year but I definitely want to be in the Fujitsu V8 Supercar Series.

“So it’s good to get a run in a V8 Supercar and be back with Kelly Racing again. This chance gives me some more seat time in a V8 and a chance to learn more about these cars.”

“Hopefully this will again generate more interest and hopefully we can potentially do something with Cam again for next year,” Kelly said.