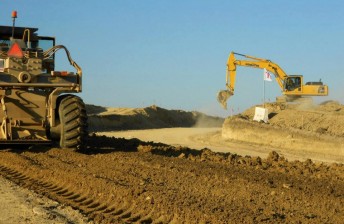 Construction, seen here at the planned Turn 10, has now stopped

V8 Supercars is hopeful that it will race in Texas in 2013, despite the future of the yet-to-be-completed Circuit of the Americas being plunged into doubt this week.

Construction at the Austin venue, which is scheduled to host Formula One, MotoGP and V8 Supercars races over the coming years, has been halted followed a dispute between the circuit owners, race promoters Full Throttle Productions and Formula One boss Bernie Ecclestone.

Following the announcement that work has stopped, Bernie Ecclestone has told the media that he has cancelled FTP’s contract to hold the Formula One event.

V8 Supercars acting CEO Shane Howard told Speedcafe.com at Sandown today that the Australian category will have to wait and see if a resolution to the issue is found.

“The issue is between Formula One and the promoter. V8 Supercars is not involved in that at all,” said Howard.

“We’re still very hopeful of being there in 2013, and that’s all we can really say. We’ll just have to see how it plays out.”

Following statements from the Circuit of the Americas, Full Throttle Productions and a Texas state comptroller this week, Ecclestone has explained at length Formula One’s part in the dispute.

“We’ve done everything we bloody well can to make this race happen,” Ecclestone told the Press Association.

“We had an agreement with Full Throttle Productions. Everything was signed and sealed, but we kept putting things off like the dates, various letters of credit and things that should have been sent, but nothing ever happened.

“Then these other people (COTA) came on the scene, saying that they wanted to do things, but that they had problems with (Full Throttle Productions owner and long-time Ecclestone ally) Tavo (Hellmund) . They said they had the circuit, and that they wanted an agreement with me.

“I told them they had to sort out the contract with Tavo, which they said they would. But that has gone away now because we’ve cancelled Tavo’s contract as he was in breach.

“We’ve waited six months for him to remedy the breach. He knows full well why we’ve cancelled. He’s happy. But these other people haven’t got a contract. All we’ve asked them to do is get us a letter of credit.

The final round of the 2011 Formula One World Championship will take place in Brazil on November 27.