Honda ups its commitment to the ARC

Honda ups its commitment to the ARC 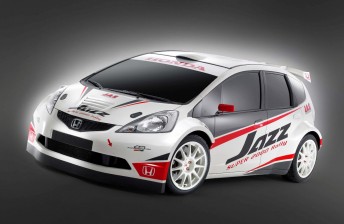 The Honda Jazz will join the ARC in 2012

Honda Australia has announced it will campaign a two-car rally team in the 2012 Bosch Australian Rally Championship using the Honda Jazz built to comply the new Australian G2 rally rules.

The exciting development is expected to lead to at least one other manufacturer committing to the revitalized Bosch ARC in the coming months as it heads to an all two wheel drive outright formula in 2013.

“Honda has clearly seen the potential in the Bosch ARC over the past two years and the advantages the new two wheel drive format will offer it in terms of branding and marketing,” said CEO of the Bosch ARC, Scott Pedder.

“The Honda Civic Type R that Eli Evans and Glen Weston have campaigned over the past two years has become a crowd favourite at rallies around the country because of how exciting it looks on the stages and the great sound it makes and the new cars are going to look and sound even better,” he said.

“The renderings of the new Honda Jazz G2 car are very exciting and give a strong indication of how the new generation of two wheel drive rally cars will look and I am sure they will fire the imagination of rally enthusiasts around the country.

“While there are strong indications that more manufacturers will be joining the Bosch ARC, Honda has to be commended for leading the way and being the first to commit to the new formula.”

Honda Australia’s two new Jazz rally cars have been designed to meet the new G2 specifications and will combine the very best in Australian and European engineering using specifications found in many World Rally Championship cars.

Both cars will be powered by a Mugen-tuned two-litre engine delivering 183kW of power at 9000RPM with 193Nm of torque.

Honda is expected to announce the identity of the driver combination in the second team Jazz that will be campaigned alongside the current team driver pairing of Eli Evans and Glen Weston, with the names expected to be revealed early next year.

“We are excited about the next year of rallying. Racing is in Honda’s DNA,” said Honda Australia spokesperson Lindsay Smalley.

“Honda is proud to continue its support of Australian rallying and we hope next season will be even better than the last. As our founder Mr. Honda said, if Honda does not race, there is no Honda.”

The new Honda Jazz team cars are expected to make their debut at the opening round of the Bosch ARC, Rally Calder, near Melbourne on March 1-4 which will be the first of six rounds scheduled in the Bosch ARC next year.