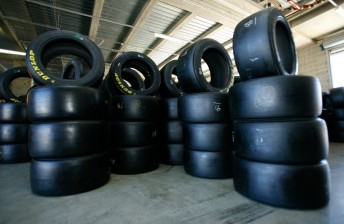 The 2012 tyre allocation is set to include more hard tyres

The tyre allocation for the V8 Supercars Championship will be significantly revised next season in order to challenge the competing teams, say series organisers.

The way the hard and soft compound Dunlop tyres are distributed next year looks certain to deviate significantly away from that seen in 2011, with a draft set of regulations sent to teams last week revealing that all seven of this season’s soft-tyre only events will include the hard tyre in 2012.

CLICK HERE for Speedcafe.com’s earlier story, including a full draft of the tyre allocation

While Adelaide, Phillip Island, Bathurst and Sydney will continue to feature only the hard tyres, a significant number of events, including Symmons Plains, Barbagallo, Hidden Valley, Townsville, Ipswich and Winton are set to see a new format introduced that will require one set of the hard tyres to be used in each race.

Only three mixed tyre races, seen at the Hidden Valley and Townsville events, have been run this year, and all three of those were designed to be run primarily on the hards, with only one set of softs allocated.

According to V8 Supercars motorsport manager Adam Perry, the formats have been changed in order to mix up the current pecking order.

“The Commission reviewed all the racing this year, looking at the racing quality on the hard, soft and mixed tyre rounds,” Perry told Speedcafe.com.

“The hard tyre rounds were pretty easy to go and sort out, because you can’t really run the soft tyre at endurance events.

“We analysed the way we did the mixed tyre races, where we had predominately the hard tyre and then a set of softs that had to be used at some stage during the race.

“What it’s about is mixing it up, giving the teams a different challenge, and hopefully ending up with a different result.

“If the format is always kept the same what you find is teams get onto the best strategy and all end up doing the same thing.”

TeamVodafone team principal Roland Dane, who has been a public critic of the mixed tyre races in the past, believes the changes will have the desired effect.

“The issue that we’ve got at the moment is a lot of people have gotten their head around using the soft tyre,” said Dane.

“Collectively as race teams up and down the paddock we are much better at using the soft tyre than we were two years ago.

“I think it (changing the formats) will create a bit of a variable. Maybe we should lob in a rule change every second weekend to really spice things up.”

V8 Supercars has not ruled out changes to the draft tyre allocation, but expects to have the final formats locked in by the end of the year.