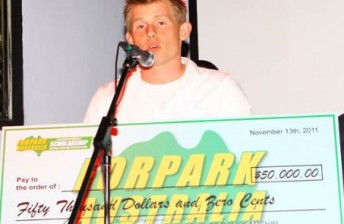 Steel Guiliana has been awarded the inaugural Forpark Australia Formula 3 Scholarship following the final round of the 2011 Formula 3 Australian Drivers’ Championship at Symmons Plains.

The winner of the scholarship, which carries $50,000 worth of funding to go towards a Gold Star Class drive in the 2012 F3 ADC, was decided by a judging panel using criteria such as attitude, physical preparation, media skills and technical feedback in addition to race results.

Driving for R-Tek Motorsport, the 20-year-old electrician from the New South Wales South Coast won the National Class this season.

“I am proud to have been selected to receive the award and I can’t wait to challenge for a Gold Star next season to follow up my National Class title this year,” said Guiliana, who previously raced in Formula BMW Asia.

“$50,000 will go a long way to funding our season next year and make things a lot easier as we step up.

“Ben (Gersekowski) and Josh (Burdon) have been fantastic competitors and we have pushed each other hard all season. Before the award was presented I was sure that all three of us had an equal chance to win – so it was a great feeling when my name was read out and I have to congratulate those guys for their season.

“I have to thank the R-Tek team for all their efforts throughout the season and for working with me this season. I have learned so much and progressed as a driver and as a person and I am really looking forward to pursuing my goal of Formula 1 by racing for the Gold Star in Formula 3 next year.”

The 2012 Formula 3 Australian Drivers’ Championship will kick off at the Clipsal 500 Adelaide across the March 1-4 weekend.