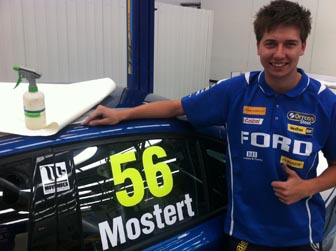 Chaz Mostert is one of Australian motorsport’s most promising young racing stars.

In older equipment, Mostert sits in seventh place and is the leading rookie in the series.

For the final two rounds, Ford Performance has seen his potential and secured him a ride in one of its ex-Mark Winterbottom Falcons.

Ahead of his debut with FPR at Sandown in the Fujitsu V8 Supercars Series this weekend, Speedcafe.com’s Grant Rowley caught up with Mostert to talk about his factory Ford ride.

SPEEDCAFE: You’ve been at FPR’s workshop preparing your car over the past week, and you were at Symmons Plains with the team as a crew member. How have you fit into the organisation?

CHAZ MOSTERT: Yeah, really well. The guys are putting in 100 percent, even to the DVS car. The way they do stuff with the engineering side is very well planned out and it’s a good to be part of it.

What I learnt at Symmons was extraordinary. I haven’t seen that in any motorsport before. So much happens behind the scenes, so it has been a good experience.

SPEEDCAFE: Can you talk a bit about the difference between Miles Racing and FPR. Two very different teams with two different expectations …

MOSTERT: Both teams are very passionate about what they do and they obviously both want to win races.

It’s just that both teams have different backing. One team is a bit more developed than the other team. Really, that is the only difference.

SPEEDCAFE: You obviously know how to drive these cars, but the one you are going to drive is probably a little more developed technically than the ones you’ve driven in the past. What’s your expectations?

MOSTERT: Yeah, obviously a different car, so I’ll go in there with a level head, keep it on the black stuff and get as many laps as I can in the practice sessions to help me go into qualifying.

If I qualify just outside the top 10 or around top 10, it would be my personal best in Development Series. I’ve always been better in the races than qualifying, so the boys will be helping me get in around there.

For the races, I’ve always been able to race inside the top 10, so just to keep that happening and keep aiming for seventh place in the championship.

SPEEDCAFE: You’re currently seventh in the series. Do you want to advance more positions in the series? Or are you just aiming for top results?

MOSTERT: I just want the best results I can, and I also want to be the top rookie (Mostert is currently leading the Rookie of the Year standings).

I’m pretty sure the championship is long gone!

I just want to keep it up there in the points, and to finish in the top 10 in my first year would be a massive achievement for myself.

SPEEDCAFE: Is it difficult going into this meeting haven never driven this race car before?

MOSTERT: I think so, but I basically have to act like it’s the start of the year again. I know I have driving Supercars, but it’s a different type of chassis, so that will be the biggest thing.

Both cars will need a different driving style, but they are still the same base.

SPEEDCAFE: What sort of assistance has the FPR drivers give you at this point?

MOSTERT: The main FPR guys have driven a few different types of chassis, and they’ve just been telling m,e what to expect out of the FPR cars. They’ve helped, shown me a bit of data here and there. Just the basics at this point.

SPEEDCAFE: Are you hoping that you will be able to do a deal that will see this two race deal extended to next year?

MOSTERT: We’ll just get through these two races now and then see where we are at.

We’ll see if Tim (Edwards) and the boys are happy with me and go from there.