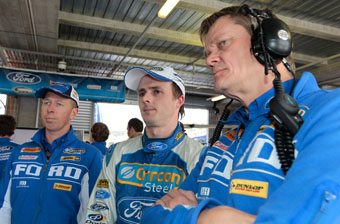 The factory Ford team has elected to hold the last of its allotted six test days after the season finale in Sydney to test “new projects” ahead of the 2012 V8 Supercars Championship.

Winterbottom had already booked a two-week American holiday before FPR confirmed its test, allowing the team’s endurance driver Richards the opportunity to get some extra, unexpected laps.

Richards will compete with FPR at the Sandown 500 and Bathurst 1000 next year – the second year of his two-season endurance driver deal.

FPR team principal Tim Edwards says that the test is a great way for Richards to keep recent V8 miles under his belt. 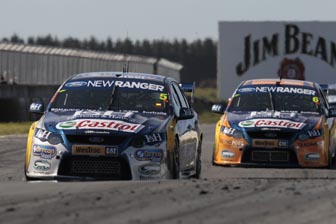 “Frosty is off to the USA for a couple of weeks, and he’d already booked that before we made our decision on the final test day,” Edwards told Speedcafe.com.

“Richo has gratefully accepted the role as test driver for car #5 for the day.”

Edwards explained that the frantic end to this year’s V8 calendar was the reason for saving one of its test days until after the racing season.

“We had six test days and we decided to keep one of them until the end of the year because of a few little projects we’ve been working on,” Edwards said.

“There’s a three month window at the end of the year where you really can’t test because the on-track stuff is so intense. If we had a bigger gap, potentially, we could have done something in late October, but rather than distract ourselves, we have delayed our last test until the 12th of December.”

At Sandown this weekend, FPR will make a return to the Fujitsu V8 Series, with Chaz Mostert stepping into one of its Falcons.

While Mostert will be a part of the post-season test, Paul Dumbrell won’t. The retiring V8 star will not be required to attend.

Pending confirmation of Dumbrell’s replacement, Edwards is unsure of which cars will attend the test.

“We’re just deciding how many cars to take there,” he said.

“We might just take three cars there. We obviously now got Chaz involved in the team, so we’re looking forward to 2012. It will be good for him to get some test mileage in the car.

“It’s unfortunate that the lateness of the deal for him to drive at Sandown, and with us being in Symmons the week before, it hasn’t given us the opportunity to even test him.

“Chaz will be in at the deep end a bit at Sandown, but we’re not expecting him to win the race.

“The test on December 12 will do him the world of good.”

Joining FPR at Winton for the December 12 test will be Kelly Racing, who also has elected to use its last test day after the season has been completed.