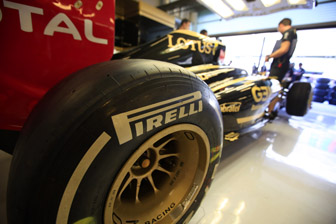 The test allows teams to test any driver who has not competed in more than two Grands Prix and currently holds an International A licence. For many of the selected drivers, it will be their very first taste of F1.

To add some pressure to the rookie drivers, Pirelli is set to try out some of its 2012 range of tyres, with in-season testing currently banned for this year.

After testing some of the 2012 tyres in Friday practice last weekend, the new tyres will be sampled in full over the course of the three days.

The latest evolutions of the P Zero tyres feature new profiles for the front and rear, and a selection of totally new compounds with only the supersoft compound unaltered.

The 2012 tyres have a squarer profile, designed to distribute wear more evenly across the footprint, while the softer compounds have been adjusted to reduce the risk of blistering.

This new range of tyres is designed to bring the relative performance of the compounds closer together, thereby making strategy even more important next year.

Leading the charge will be Red Bull, who last year launched Daniel Ricciardo into stardom territory when the Australian was given a chance in the three-day test, setting a faster time than Vettel’s qualifying lap.

This year, the champion team will field Jean-Eric Vergne for all three days. The 21-year-old Frenchman, who recently drove Jaime Alguersuari’s Toro Rosso during the opening Friday practice sessions in Korea and Abu Dhabi, has been a member of Red Bull’s young driver programme since 2007 and finished second in this year’s Formula Renault 3.5 series.

Frenchman Jules Bianchi will be Ferrari’s sole driver, while Mercedes is giving British racer Sam Bird a second chance in the young driver test having completed last year’s program for the team.

Renault has three drivers stepping into the R31 over the three days – Robert Wickens, Kevin Korjus and the Czech Republic’s Jan Charouz.  Force India will split its program, giving 20 year-old British driver Max Chilton laps on Tuesday and Thursday, with Wednesday’s running set to be undertaken by Johnny Cecotto Junior, who will enjoy his first taste of F1 power. Cecotto’s father is no stranger to world motorsport, having won two motorcycling championships in 1975 and 1978 before switching to F1 during the 1980s, driving for Theodore and Toleman.

Swiss team Sauber will hand to keys of its C30 to countryman Fabio Leimer. Leimer will get one day at the wheel, with Sauber reserve Esteban Gutierrez driving the other two.  Toro Rosso will also spit its on-track activity, with Stefano Coletti (Tuesday and Thursday) and Kevin Ceccon (Wednesday) sharing time in the car.

After the official young driver test, the F1 circus heads to final round of the 2011 Formula One World Championship will be held at Interlagos, Brazil, on November 25-27.

See below for the complete list of teams and drivers for the young driver test.