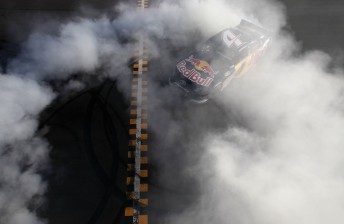 Kasey Kahne has won the Kobalt Tools 500 at Phoenix, but it was the third place finish for Carl Edwards that has him in the box seat heading to the final race in Miami next weekend.

Edwards will take a three-point lead to the Ford 400 after finishing second, while championship challenger Tony Stewart finished in third place after passing Burton on the final corner.

The win for Kahne was only the second victory for the Red Bull Toyota team, which has announced that it will not be continuing in the Sprint Cup in 2012.

Pole sitter Matt Kenseth was challenging for the lead throughout the first half of the race, but his hopes were dashed when Brian Vickers pushed him into the fence to continue their feud from Martinsville two weeks ago.

After being benched by NASCAR last weekend in Texas for his truck race clash, Kyle Bush had a shocking weekend with engine failure ending his afternoon early.