Hamilton wins as Vettel out of luck at Yas

Hamilton wins as Vettel out of luck at Yas 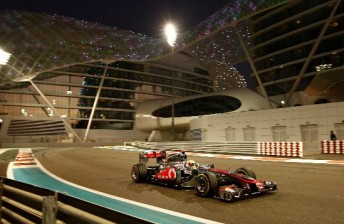 Lewis Hamilton has taken advantage of an opening lap disaster for Sebastian Vettel to win the Abu Dhabi Grand Prix.

Starting from pole position, Vettel enjoyed a strong start to lead into Turn 1, but spun off the track at the following corner with a flat right-rear tyre.

While the damage resulting from the tyre forced the Red Bull driver into retirement, Hamilton assumed the lead and would not again be headed outside of the two pitstop cycles.

Fernando Alonso set-up a second placed finish with mesmerising opening lap in the Ferrari. Starting from fifth on the grid, the Spaniard drove around the outside of Mark Webber into Turn 1, before pulling a similar move on Jenson Button in the braking area at Turn 9.

Alonso did his best to keep Hamilton honest for the remainder of the race, with less than two seconds separating the pair by the time they pitted together on Lap 17.

Hamilton edged the gap out towards five seconds in the middle stint however, before any chance of an Alonso victory was lost when the Ferrari driver lost time with a sticky right-front wheel in his second stop.

The final margin between the pair was 8.4s, with Button a further 17.4s adrift in third.

The 2009 World Champion’s chances of victory were dashed by a combination of Alonso’s opening lap heroics and his own KERS issues which began after a dozen laps and stayed with the McLaren for the duration.

Webber ended the race fourth, having been the only driver in the top 15 to employ a three-stop strategy. The Australian battled with Button for third in the opening stint, but dropped to fifth behind Felipe Massa in the first stop with a slow right-rear.

Having proven unable to regain the position lost to Massa, Webber became the first man to make his second stop on Lap 36 – opting for a third set of soft tyres and ensuring at least one more stop was needed to comply with the two-compound regulations.

Webber charged past both Massa and Button during the final third of the race, getting to within 8.0s of Alonso before pitting for the hards at the end of the penultimate lap.

A late-race spin from Massa helped the Red Bull return to the track comfortably between Button and the second Ferrari, while Nico Rosberg, Michael Schumacher, Adrian Sutil, Paul di Resta and Kamui Kobayashi rounded out the top 10.

Australian Daniel Ricciardo failed to finish after suffering an alternator failure late in the going.

The results see Hamilton move to within six points of Webber in the battle for fourth in the Drivers’ Championship, while 10th for Kobayashi edges Sauber one point clear of Toro Rosso for seventh in the Constructors’.

The 2011 Formula One World Championship concludes in Brazil in two weeks time.