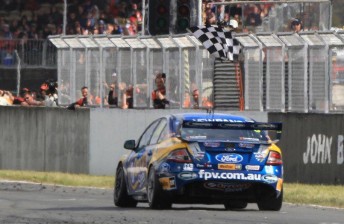 Winterbottom finished third, but it could have been a win

The two front-row starters fought it out for the lead in the first stint of the 200km race, with Dumbrell holding the advantage despite appearing to lack the outright speed of the Orrcon entry.

The duo made nose-to-tail contact on their way into pitlane for their first stops, and found themselves exiting behind eventual top-two finishers Jamie Whincup and Will Davison.

Dumbrell lost the position to Winterbottom by spearing off at the pit exit, and eventually finished fourth after an inside lunge into the hairpin failed to pay dividends.

Winterbottom later admitted that the time lost behind Dumbrell had been costly.

“It cost us a lot of speed – our car was really quick and we were getting held up,” said Winterbottom.

“He was defending, and you obviously can’t hit team cars too much, so we followed him around, lost brake performance and dropped back.

“I didn’t have the fuel economy of the other two cars for some reason in that race, lost a bit of ground and came out from the pitstop behind them (Whincup and Davison). That was pretty well the race.”

Winterbottom said he will review Dumbrell’s driving using the television coverage of the race, but had not expected The Bottle-O entry to simply let him through.

“You’ve got to race, you’re out there racing and you never expect anyone to move over,” he said.

“But you never want to crash into a team car so it’s a fine line. We’ll have a look at the race and see what it looks like from the outside, but everyone is out there to win and you don’t want it handed to you.”

Having struggled for consistency on the soft tyre for the balance of the season, the #5 Falcon has finished in the top four in each of the races across the Armor All Gold Coast 600 and Falken Tasmania Challenge weekends.

Winterbottom has now moved to third in the championship standings, and says there’s plenty of scope for more to improvement.

“It’s been hard work, the guys have really worked hard in the workshop and been supportive of the direction that we’ve gone in,” said Winterbottom.

“We’ve made big gains, but it’s only just started with the new set-ups. Everything we’ve tried in the last six months has probably been irrelevant, because now the car is completely different.

“So we’ve got to go back and go through everything we’ve tried when we were struggling, so it’s almost like starting again.

“The changes are minor but enough to transform the car into what it is.”