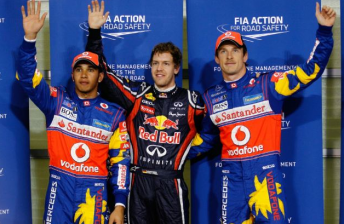 The result matches Mansell’s record with Williams from the 1992 F1 season.

Australian Red Bull racer Mark Webber couldn’t improve on his second run, leaving him fourth ahead of the Ferrari pair of Fernando Alonso and Felipe Massa.

The two Ferrari’s will start ahead of the two Mercedes GP and Force India entries. Nico Rosberg lapped his car in 1m 39.773s for seventh ahead of team-mate Michael Schumacher. Adrian Sutil and Paul di Resta will start ninth and 10th.