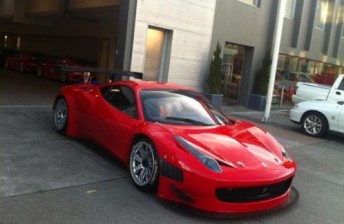 The 458 GT3 that Simonsen is driving this weekend

Allan Simonsen has staked his claim to the honour of being the fastest ever man around Mount Panorama in a tin-top car during preparations for next February’s Armor All Bathurst 12 Hour.

The Dane lapped the 6.21km course aboard a Maranello Motorsport-prepared Ferrari 458 GT3 in 2:04.9560s during the annual Sprint Bathurst event, which sees a variety of race and performance road cars take to the track for a series of non-competitive sprints.

Lago and his co-driver Wayne Park have both drove the two-time Porsche GT3 Cup Challenge winner’s new Lamborghini across the Sprint Bathurst weekend, with Park setting a relatively sedate best of 2:10.41s. The pair will be joined for the 12 Hour race by Fujitsu V8 Supercars Series front-runner David Russell.

Huglin gave all three of his co-drivers a run at Sprint Bathurst, with Cameron McConville making a quick trip to the Mountain prior to his Symmons Plains commitments.

Dutchman Peter Kox and Australian Luke Searle will also join Huglin for next year’s event, with Kox setting a 2:06.71s lap this afternoon.