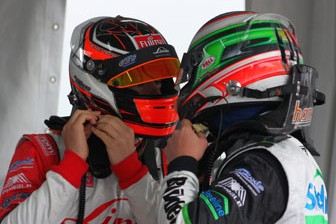 Foster, competing in his last-ever Formula Ford race, took two wins from three races over the weekend to secure the round win.

The Steeline Mygale driver had been locked in a weekend long fight with CAMS Rising Star Jack Le Brocq for second in the championship and fell just six points short after a dominant performance.

After scoring pole position and yesterday’s first race win, Foster finished second behind team-mate Cameron Waters in the first race today before cruising to victory in the final.

Behind Foster was Borland Racing Developments pilot Daniel Erickson, who scored second for the round ahead of newly-crowned champion Waters.

Waters ended the last race with a bang, launching his Mygale off a kerb and hitting the wall.

Foster thanked his Sonic team for the win.

“It’s a massive credit to the whole Sonic team, because the car was just brilliant all weekend,” Foster said.

“For me to be able to maintain the lead and hold off the drivers behind is all thanks to the boys who have just done an amazing job.

“It’s the first time all year that I’ve been able to put a consistent round together, which is a good feeling and a nice way for me to finish my time in Formula Ford. It’s also a nice way to thank the whole Sonic team for all their work this season.

“Obviously I would have liked to be on the top step of the podium in the championship as well, but it didn’t work out that way in the end. I pushed as hard as I could this weekend to get second from Jack, but in the end it wasn’t to be.”

Second place man Erickson produced his most consistent showing of the year with good pace across the weekend in one of the Spectrum chassis’ most competitive rounds.

“The Bosch Batteries Spectrum was awesome all weekend, we had great pace in every race, but unfortunately we just couldn’t turn that into a win,” Erickson said.

“I’m really happy for the team and have to say a huge thank you to all the guys who have worked on the car all year, it’s a good way to end the season and nice to give them some silverware to take home. The whole team was really strong this weekend and my teammate Shae Davies scored his best result of the year so it was a good weekend throughout.”

This year’s champion Waters somehow managed to finish third for the round, despite a DNF in the final race. The Linde Mygale drive ran off track and made heavy contact with the wall, which ended his event.

“This round has just been awesome, Team Sonic have been unstoppable all weekend and the car has just been amazing to drive until the last race when I forgot I was racing Formula Ford and thought I was rallying,” Waters said.

“Overall the season has been amazing, I’ve obviously had some downs, but a lot of ups and it’s awesome to win the championship with Sonic Motor Racing Services, I can’t thank them enough.”

Synergy Motorsport driver Mathew Hart wrapped up the Rookie of the Year title with great drive in the final race.

“I’m really happy after this weekend, the whole team has worked really hard all year but we didn’t have a lot of luck in the beginning of the season. The second half of the year things have turned around and I’ve been a consistent points finisher and that’s been rewarded with the Rookie of the Year title,” Hart said.

Hart also finished fourth for the round ahead of Shae Davies and championship runner-up Le Brocq, while Trent Harrison, Liam Sager, Tom Williamson and Jonathan Venter rounded out the top 10.