McConville to replace Bright for Race 24

McConville to replace Bright for Race 24 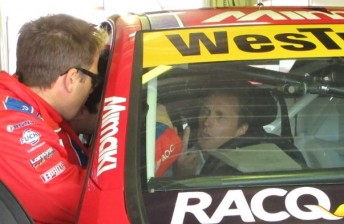 Cameron McConville will be a late replacement for Team BOC’s Jason Bright at the Falken Tasmania Challenge today.

Bright has had to pull out of Race 24 of the V8 Supercars Championship after aggravating a rib injury in yesterday’s 120km event.

Post-session treatment from V8 Supercars’ Dr Carl Le proved insufficient in relieving the pain, forcing Bright out of the event.

McConville was at the Symmons Plains circuit working as a driving standards observer for the Australian Formula Ford Championship.

The 37-year-old drove in this year’s L&H 500 and Supercheap Auto Bathurst 1000 events with the Toll Holden Racing Team’s James Courtney, and competes full-time in the Auto One V8 Ute Racing Series. Bright is hopeful that he will be fit for next weekend’s Norton 360 Sandown Challenge.

“I’m gutted – I’ve never been in so much pain and it just totally compromised that qualifying session,” said Bright.

“I’ve had injuries before and the adrenalin takes over and you don’t feel it in the race car, but this time it just totally dominated my whole session.

“Every bump, gear change and braking zone I felt. I couldn’t drive anywhere near where I needed to.

“We’re going to get a whole heap of tests done and Dr Carl says there are some treatments we can try. We need to get stuck into that immediately to see where we are come next Friday.”