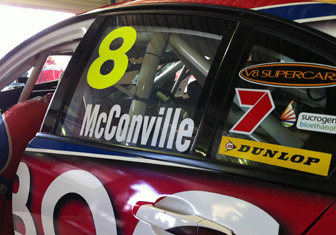 Cameron McConville says that he was pleased to finish a competitive 19th in Race 24 of the V8 Supercars Championship at Symmons Plains.

The versatile racer was drafted into the #8 Team BOC Commodore VE just hours before today’s race when Jason Bright withdrew from the meeting with a rib injury.

Bright was taken to Launceston General Hospital where he was cleared to fly back to Melbourne tonight. He will undergo an MRI scan tomorrow in Melbourne to fully diagnose the problem.

It is unclear yet whether he will compete at Sandown next weekend.

McConville used a raft of spare race gear to suit up for the race, and after a conservative start, the team used a long first stint strategy to help elevate him up to an excellent 19th place finish.

“I really enjoyed it to be honest,” McConville told Speedcafe.com.

“It felt really weird when I drove the car for the first time on the formation lap. I’d only been at full throttle twice when the lights went out. It felt weird, but I have to say, I really enjoyed it.

“I felt really comfortable in the car. For the first 10 laps, I hung at the back to get my head around the car and get a feel of the balance.

“Our strategy was good. The plan was always to do a long first stint and get better track position and be stronger towards the end.

“I was surprised. I felt a lot more comfortable than I thought I would, especially once I found my braking markers and things like that. We didn’t set the world on fire, but I was happy to be inside the top 20.

“I have to give a big thanks to Brad and Kim for trusting me with the car. Now, I just hope Brighty is OK.”

McConville will compete in the penultimate round of the Auto One V8 Utes title at Sandown, but did not rule out racing at Sandown, if Bright is unavailable.

“I have to be fair to the Walkinshaw guys as far as my Ute duties go,” McConville said.

“It’s hard to double up, but I probably wouldn’t say no. Like any other driver, I can’t help myself!”

CLICK HERE for more on Bright’s plight ahead of Sandown next weekend.