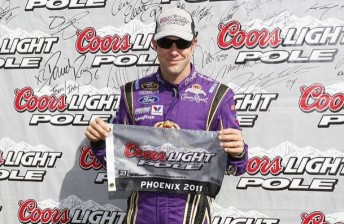 Kenseth lapped the re-profiled Phoenix International Raceway in 26.26s to beat Allmendinger by a substantial 0.13s.

Qualifying saw most drivers run approximately a second slower than their earlier practice efforts, with warmer track conditions blamed for the lack of speed.