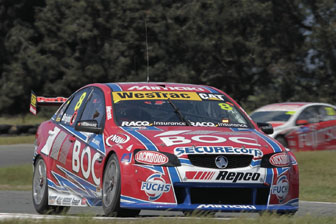 Jason Bright at Symmons Plains. Will he be at Sandown next weekend?

Brad Jones Racing is plotting a number of replacement driver options, if Jason Bright is unable to drive the #8 Team BOC Commodore at Sandown this coming weekend.

An injury to Bright’s rib has forced him out of the today’s Symmons Plains race, replaced by former team driver Cameron McConville.

Bright is currently at Launceston General Hospital getting X-rays, and depending on the extent of the injury, may keep him out of the seat at next weekend’s Norton 360 Sandown Challenge – the only back-to-back event on the 2011 V8 Supercars calendar.

BJR is looking at a number of substitutes to fill in for Bright, but team owner Kim Jones says that they will have a better idea of the situation when the results of Bright’s scan comes through.

“There’s so many unknowns at the moment,” Jones told Speedcafe.com at Symmons Plains.

“We’ve got no idea of what we’re doing or where we are going.

“We’re not mentioning any names at the moment, but obviously, if Jason is fit to race, he’ll be in the car.

“The thought process about alternatives has already started. We’re just working through that.

“It’s a wait and see game and we’ll get all the information first. Life has taught me that you don’t make rash decisions. You wait until you have everything at hand, and that’s what we’ll be doing as a group.”

CLICK HERE for Speedcafe.com’s breaking story on Bright’s injury and replacement, plus an audio interview with Bright.