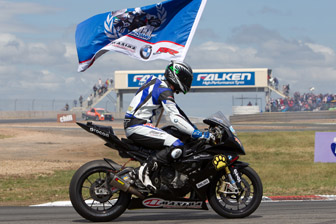 Yesterday’s clash with Robbie Bugden resulted in a severely-swollen arm for Allerton, who dismissed the discomfort and finished the job.

Allerton title is his second Superbike title – adding to his 2008 crown. He is only the fifth rider in the ASBK’s history to do so.

“I didn’t get a great start today and though I passed a few people straight up I just didn’t feel strong enough under brakes with my arm the way it is,” said Allerton.

“I kept pushing and pushing but in the end held onto 5th, at the end of the race I honestly thought I was a point off taking home the championship but my team let me know I’d done it which was a great feeling.

“So many people in the team have worked hard for this, I have to thank everyone at Procon Maxima BMW for their hard work week in, week out but also all of those people behind the scenes as well that have helped me make the most of this opportunity including BMW who have been so supportive.

“I’d like to dedicate the win to my grandfather who passed away last week, he’s played a huge part in my career and my life.”

For Waters, the result was redemption after he retired to the pits yesterday while enjoying a similar lead in the opening race.

“Yesterday was just one of those things, the engine problem was disappointing but we bounced back today,” said Waters.

“I got a good start but made a mistake at the hairpin on the first lap. It probably made for a great race for the crowd to see us all battling it out at the start.

“I worked my way through and made a bit of a break, I was lucky to be fast enough to keep the other guys just behind me.

“Breaking the lap record again shows just how fast the bike is here and I’m looking forward to getting to Phillip Island and finishing the year off really well.”

Race 1 winner Jamie Stauffer finished second on the Team Honda machine, while Troy Herfoss added another race podium to his name in third.

Stauffer locked down another round win with the result today, and was only 2 points shy of forcing Glenn Allerton to wait another week to race for the title.

“It was a pretty hard race again from seventh on the grid, I attacked early on and was able to move forward but there was no catching Josh in today’s race,” said Stauffer.

“It’s good to get the round win and keep focused on the goal of second in the championship.

“Congratulations to Glenn on a great win, he was always going to be tough to beat with such a big lead.”

The final round of the QBE Australian Superbike Championships, a multi-discipline ‘festival’ of two-wheel racing, will be held at the Phillip Island Grand Prix Circuit from November 18-20.