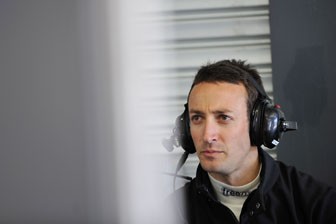 V8 Supercars team owner/driver Dean Fiore is close to formalising his plans for the 2012 championship.

The West Australian is currently in his second year of campaigning an ex-Triple Eight Ford Falcon FG under his own Triple F Racing banner, and sits 26th in the point standings.

Having previously stated that he’s weighing up his options for next season in a bid to become more competitive, Fiore told Speedcafe.com at Symmons Plains that he is yet to officially lock in his 2012 deal.

While it looks increasingly likely that he will become part of a three-car operation at Dick Johnson Racing, Fiore says that he won’t make anything official until the end of this year’s racing season.

“We’ll get over this year’s racing before anything is made official,” Fiore told Speedcafe.com.

“I’m chatting with Dick’s team, for sure, but nothing has been signed yet.”

Dick Johnson Racing has been eyeing an expansion in recent times, telling Speedcafe.com last month that it had received interest in running an extra car. CLICK HERE for Speedcafe’s previous story.

Additionally, the famous Queensland team is currently advertising to fill a raft of positions, including for the roles of race engineer and number one and two mechanics.

DJR team manager Malcolm Swetnam told Speedcafe.com at Symmons Plains that due to its commercial obligations, its 2012 plans will not be announced until the new year.

Now in his third season of team ownership and his second year of running his own squad, Fiore admits the task of being an owner/driver has proved exceedingly difficult.

“I didn’t think it was going to be this hard – I thought I had the capacity to run the commercial side, oversee the team and drive,” said Fiore.

“In hindsight, I think I was foolish to think that I could take it on. When you look at Mark Skaife and Jason Bright, they struggled when they became heavily involved in their business.

“To get the best out of myself and give it the best shot I could, I needed to consider a new structure.

“We’ve been doing this the toughest in pitlane. We get no on-track support. Yes, we have connections with Triple Eight, it’s a Triple Eight car, but it is not current stuff. It’s boarder line irrelevent, we’re flying blind.”

“I’ve decided that I need a team-mate, and a bigger, more experienced team behind me to give myself the best shot. That’s why this has all gone on.”