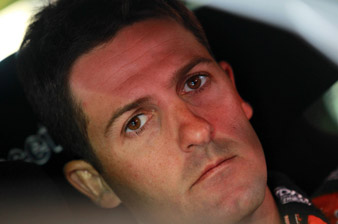 While Winterbottom and Dumbrell swapped the top spot throughout the majority of the 20 minute session, Whincup’s final flyer of 51.36s undercut the Orrcon Falcon’s best effort by 0.03s.

Winterbottom failed to improve his time on his third and final new tyre set, ensuring Whincup his eighth pole of the 2011 season.

“We went really early on our tyres expecting to lose a few positions at the end of the session but it didn’t happen so we’re very very happy to be on pole.”

Shane van Gisbergen ended the session third fastest ahead of Dumbrell, while Tony D’Alberto was fifth but will start eighth due to a penalty for a yellow flag infringement yesterday.

Craig Lowndes was sixth fastest in qualifying, with Will Davison, Alex Davison, Fabian Coulthard and Garth Tander rounding out the top 10.

Tander’s final two laps were ruined when the Toll Holden Racing Team driver went off the road at Turn 6 with less than a minute remaining.

Moments earlier, the end of the back straight had also caught out Steven Johnson – who speared off while avoiding a slow Paul Dumbrell and Russell Ingall, with The Bottle-O Falcon having caused the bottle-neck while clearing space for his own hot lap.

Dumbrell later received a three-place grid penalty for the incident with Johnson, dropping him from third on the grid to sixth.