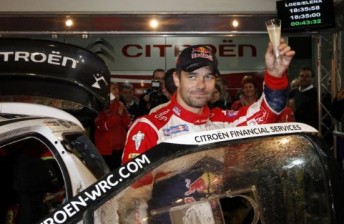 Hirvonen had held a narrow lead over his Citroen rival when he spun on Special Stage 7. The Ford Fiesta sustained radiator damage in the incident – eventually halting Hirvonen for good on the road section back to midday service.

“I spun, which at first felt like a typically harmless Rally GB incident,” said Hirvonen.

“I had a big slide and the rear of the car hit a bank. The front also touched the bank, hitting a tree stump and puncturing the radiator.

“I continued for another 5km but didn’t realise the engine was slowly losing water, causing big damage.”

Loeb leads the rally by just 1.2s from Jari-Matti Latvala at the end of Day 2, with Mads Ostberg (Stobart Ford) over a minute further adrift in third. 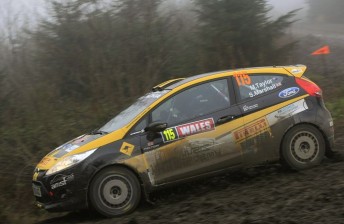 While the championship pressure is now off of Loeb’s shoulders, the Frenchman says he’s still focussed on winning the rally.

“Obviously, I’m much more relaxed now, but we’ve still got two days racing to go,” he said at the completion of Day 2.

“Even if I lost time this afternoon as I was awaiting confirmation of Mikko’s retirement, I’m still leading the rally and I said to myself that it would be good to end the season with a victory.

“If I feel good in tomorrow’s stages I’m going to try and score my fourth consecutive win in this rally.”

Of the Australian contingent, Molly Taylor currently sits fifth in the WRC Academy Class having set the fastest time on Special Stage 11.

Brendon Reeves however will rely on the SupeRally rules to continue in the rally tomorrow, having suffered a driveshaft failure on the very opening stage of Day 2.