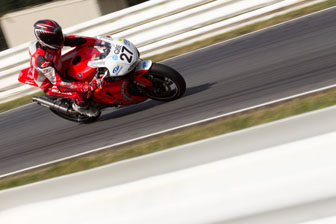 Team Honda’s Jamie Stauffer has won a dramatic opening race at Symmons Plains in the first race of Round 7 of the QBE Australian Superbike Championships today.

From fifth on the grid, Stauffer did his title chances no harm as chaos erupted just after mid-race distance.

Leading from the start, Team Suzuki’s Josh Waters had amassed a handy buffer approaching lap 11 before a mechanical issue saw him slow on the front straight.

Polesitter Wayne Maxwell swept into the lead but it fell away beneath him in the space of seconds as he lost the front end of his Team Honda machine entering the hairpin.

Just a lap later, the hairpin was the site of a controversial clash between a hard-charging Robbie Bugden and BMW series leader Glenn Allerton.

Bugden nosed his Team Mack Trucks Suzuki up the inside of Allerton before contact was made. Both riders fell off their bikes, but the frustrated Allerton re-mounted his BMW to take seventh.

Stauffer stormed into the distance for the win ahead of Team Suzuki’s Troy Herfoss, who pipped Craig Coxhell on the Demolition Plus GAS Honda with a daring last corner move.

After qualifying fifth, Stauffer was pleased to bounce back and record his fourth win in the space of five races.

“I was in a good battle with Glenn for the first half of the race before everything started happening on track.

“Fortunately I avoided the trouble, hard luck to Wayne who was showing great speed.

“It’s great to get another win in the bag for Team Honda.”

Ben Henry was able to record his best finish of the season with fourth place on his CUBE Racing GSX-R1000.