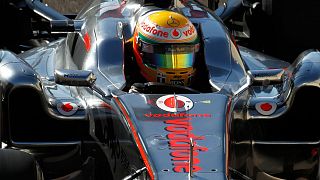 McLaren has set the pace in the opening practice sessions at the Yas Marina Circuit ahead of this weekend’s Abu Dhabi Formula One Grand Prix.

Jenson Button and Lewis Hamilton topped the times in the two practice sessions, with Hamilton scoring the fastest time of the two sessions combined.

Ferrari was the closest to its long-time rivals. Fernando Alonso scoring the third fastest time ahead of his team-mate Felipe Massa.

Red Bull Racing looked strong in the first session, with Mark Webber second fastest, just over a tenth of a second behind Button. In the second session, though, Webber and world champion Sebastian Vettel were relegated to fifth and sixth respectively.

One more practice session will be held at Abu Dhabi before qualifying.