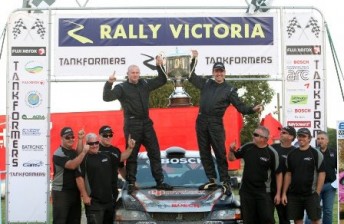 Justin Dowel and Matt Lee have won the 2011 Bosch Australian Rally Championship after securing the title with a hard-fought battle over the final event, Rally Victoria.

Driving their Activ RallySport Mitsubishi Lancer Evolution IX, the Victorian needed to finish the event two places ahead of his Queensland rival, Ryan Smart, and managed that convincingly after the Toyota driver suffered driveshaft failure late in the event.

Second place overall in Rally Victoria, behind 2010 Australian Champion Simon Evans, gives Dowel and Lee their first national championship in a year that also saw them take their first event win, at the Rally of South Australia.

“It’s a really freaky feeling, and it really hasn’t sunk in yet.

“We had a good day today, but I had to pull my finger out this afternoon to put the pressure back on Ryan. I knew that if we kept persisting then the result may come.

“We never gave up, even after yesterday’s problems when I put the car off the road. The guys in the team just kept telling me to ‘keep pushing’ and it’s paid off. I can’t believe it.”

After a spin on the first stage of the event cost Dowel over 30 seconds, he clawed his way back from 10th place with a string of top three stage times. 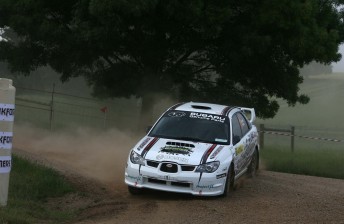 However, with two stages of the event to run he still trailed Smart by 33.9 seconds, but when the Queenslander broke a driveshaft and dropped over six minutes, the fight for the Bosch Australian Rally Championship was as good as over.

Dowel simply had to finish the final 1.6 kilometre spectator stage at Warragul’s Lardner Park to claim the title, which he duly did.

He and Lee finished the event in second place, just over a minute behind Simon Evans, after which the celebrations started in earnest.

“What an unreal feeling – I really am overwhelmed with a wave of emotions at the moment,” co-driver Matt Lee said.

“The whole team have put in so much effort this year, and it’s great to give them the result we’ve been aiming for all year.

“JD and I have being competing together for nine years, and we’ve had lots of ups and downs along the way. After keeping our heads in this event it’s great to finish the year on such a high note.

It was a devastating blow for Smart who had run his Bosch ARC campaign on a shoe string budget this year and led the series for most of the year only to have his dreams shattered within sight of the goal.

“I don’t know what to say, I am just so devastated and gutted, congratulations to Justin for his win, I don’t know what I will do now, I have sold the car and might go and buy myself a dirt bike and take a year off,” said Smart.

Simon Evans partnered by his wife Sue came out of retirement to contest their home event and took an all the way victory in the only rally on the Australian Championship calendar he has never won.

“It was our first Rally Victoria and I have to thank my wife Suzy for the great job she did as co-driver this weekend, it was fantastic and we proved that we have lost nothing despite the year off,” said Evans.

The Bosch Australian Rally Championship gets under way again at the new Rally Calder in Victoria, from March 2 to 4.

Check out the video highlights of the day’s action