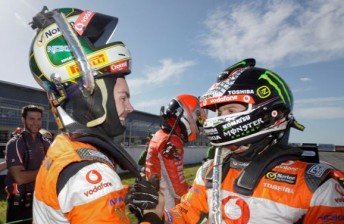 Jamie Whincup says he is firmly focussed on the points equation as he heads into the final five races of the season chasing a third V8 Supercars Championship title.

The 28-year-old sits 155 points clear of Craig Lowndes after beating his team-mate home in the opening 120km heat of the Falken Tasmania Challenge.

Whincup had to overcome Mark Winterbottom in order to take the maximum points – turning the tables on the Ford Performance Racing outfit that had looked the class of the field in practice.

The race win is the 50th of Whincup’s career, placing him equal third on the all-time winner’s list alongside Garth Tander.

“The Ford guys were very strong yesterday, so we knew we had our work cut out to make sure we had a strong run today,” said Whincup after the race.

“To do what we did today you need quick cars, and both of our cars were unbelievably strong.

“The team did a phenomenal job to have two quick, clean pitstops, and we were able to control the race from there.

“For some reason we’ve got to work really hard here to have a good car and good pace. Yesterday showed that – we had a reasonable car but we were down in sixth, seventh and eighth.

“We had to work ultra hard today and it’s just great to get a pole and a win for my engineer Dutto who is celebrating his birthday today.”

Asked if the championship scenario is on his mind during the post-race press conference, Whincup was quick to respond.

“Of course we’re thinking about the championship,” he said.

“It’s great to get a good start to what I call the finish (of the championship), and now we’ve just got to keep focussed right until the end.”

Having qualified sixth in the morning’s 20 minute session, Lowndes benefited from grid penalties for Tony D’Alberto and Paul Dumbrell to start fourth, before making it into the runner-up spot by the end of the 50 laps.

“Our car was running fantastically from the mid-point to the end of the race – it really came on strong. We needed that today because we had to pass Shane (van Gisbergen) and also Will (Davison),” said Lowndes.

“We know where our cars are strong and where they are week compared to the FPR cars, so we’ll have a bit of work to do tonight.

“All in all it’s fantastic because, as it’s been all year, when we can’t win we get the best result we can and today second was the best.”