Jamie Whincup too good in Race 23

Jamie Whincup too good in Race 23 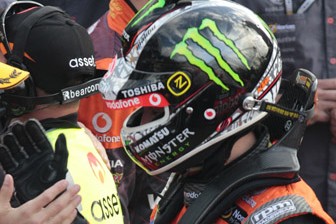 Jamie Whincup has cruised to victory in Race 23 of the V8 Supercars Championship at the Falken Tasmania Challenge.

After losing out to Mark Winterbottom off the start, Whincup spent 10 laps behind the Orrcon Steel FPR Falcon before making the winning move at Turn 6.

Whincup then survived a mid-race Safety Car restart to win by 8.7s from Craig Lowndes, Garth Tander and Winterbottom – who had lost five seconds and three positions with a slow pitstop.

All three drivers made their way around Will Davison in the second half of the race, after the Trading Post Falcon had jumped from fifth to second by taking just two tyres in his stop.

Davison eventually hung on to beat his brother Alex into fifth, while Shane van Gisbergen was sixth.

The Kiwi held down third with just 18 laps to go, but lost four positions when he locked the SP Tools Falcon’s rear brakes into the hairpin while pressuring Will Davison.

It took Lowndes another 10 laps to pass the Trading Post Falcon, with the three-time champion repeating sliding down the inside at Turn 6 – mirroring the move that had settled the battle between their respective team-mates Whincup and Winterbottom earlier in the race.

Things got worse for FPR as the race progressed, with Tander passing both Winterbottom and Davison on Lap 40 when Winterbottom ran wide at the hairpin while trying to pass his team-mate.

The hard luck stories belonged to Russell Ingall and Greg Murphy, who both failed to finish after each losing a wheel during the race.

While Ingall was able to limp back to the pits with his left-front wheel still under the guard of the Supercheap Holden, Murphy’s right-rear was stranded at Turn 3 – triggering the race’s one and only Safety Car.

Warren Luff fared little better in 26th having broken a steering arm in the opening lap congestion, while Jason Bright was 25th after losing nine position on the penultimate lap while battling with Tony D’Alberto.

David Reynolds visited the outfield early in the race after coming off second best in a duel with Steve Owen at Turn 6, while Paul Dumbrell had two offs at Turn 2 on his way to a 13th place finish.