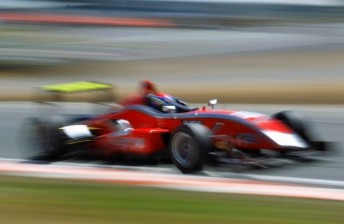 Chris Gilmour has taken a major step towards his first Formula 3 Australian Drivers’ Championship crown by winning Race 1 at the Falken Tasmania Challenge.

Having qualified second behind title rival James Winslow, the Queenslander made one of his customary lightening starts – jumping to a 1.0s lead by the end of the opening lap.

Winslow fought off a Turn 1 challenge from John Magro, before positioning himself for an attack on the race lead by Lap 7.

The Briton’s enthusiasm for the position would be his downfall however, with Tim Macrow finding his way into second place after Winslow lost momentum while trying to find a way around Gilmour.

Magro was the charger during the second half of the race, disposing of Winslow and Macrow into Turn 6 on Laps 9 and 13 respectively.

The mango farmer then launched a final assault on the race win, falling just 0.22s short at the chequered flag after finding the inside line well and truly blocked into Turn 6 on the final lap.

Macrow held on for a comfortable third, while Winslow was fourth after suffering from increasing clutch-slip as the race wore on.

Gilmour now leads the standings by 23 points from Winslow with two races and 34 points still available.