V8 community gets behind Movember cause

V8 community gets behind Movember cause 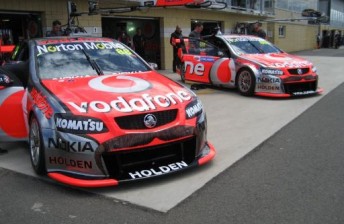 The TeamVodafone Commodores in the Symmons Plains pitlane

Hairy upper lips have crept into the V8 Supercars pit lane at Symmons Plains this weekend.

As part of the Movember charity, men across Australia and the world will grow moustaches in the name of mens health, raising funds and awareness, specifically for prostate cancer and depression in men.

TeamVodafone is the team taking the cause most seriously, with as many as 15 of its team members growing ‘mos’ and raising cash.

Even the team’s day-glow red Commodores have spouted moustaches – to be featured on the front bars of both Commodores at this weekend’s Falken Tasmania Challenge at Symmons Plains.

Ford Performance Racing is also heavily on the moustache bandwagon, acting as an official partner of Movember. The team is displaying its pledge to the cause with stickers on the bonnets of each of its three cars. Tony D'Alberto and Will Davison

D’Alberto, a first-time Movember contributor, says that it is a great cause to support.

“I think it’s a terrific cause and one that everybody should get behind – even if you aren’t game enough to grow a ‘mo’ of their own,” Tony D’Alberto said.

“My face and many others are walking-talking bill boards for mens health issues this month, so I’m pleased to be bringing prostate cancer and depression to the forefront.

“To be honest, I think having a moustache is a lot of hard work. I’ve never had one before and it is taking a long time to grow!

“My dad and my uncle both have moustaches, so I’m following in their foot steps. They’ve given me a few tips on how to manage it! It’s a bit of fun, and I hope I can get some support and raise some money.”