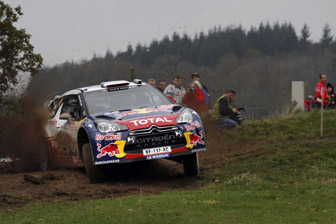 The gap between the pair stands at 0.7s after SS3, with the second works Ford driver Jari-Matti Latvala a further 2.4s adrift in third.

The big story from the early running however was a crash from Sebastien Ogier (Citroen Racing) on the very first stage of the event.

“In a fairly quick right-hand curve I tried to tighten my line by going up onto a pavement,” described Ogier, who will restart on Friday morning 15 minutes behind the rally leader.

“This  destabilized the car and we hit a rock as we came out a bit wide. As is often the case in this

type of situation, a few centimetres made all the difference. We hit with the left-hand rear wheel and the suspension broke.”

With Loeb and Hirvonen separated by eight points heading into the final event of the season, Ogier’s crash could affect the championship outcome.

“It’s a shame – it can make it a little bit more difficult now,” said Loeb of Ogier’s accident.

“It was going to be better for me if somebody other than Mikko (Hirvonen) won the rally, because the difference between second and third place is smaller than first and second.

“It would have been good if he (Ogier) had been winning the rally. Now, if I don’t win and Mikko does, then it can come down to the powerstage and this is difficult. But, this is how it is, I’m on my own now.”

Australians Brendan Reeves and Rhianon Smyth have had a mixed first day to Wales Rally GB, the final round of the 2011 FIA World Rally Championship Academy.

Driving their Ford Fiesta R2, the Victorians started the event brilliantly, winning the first tarmac stage by 1.1 second from local driver Craig Breen, and then backing that up with second quickest time on the repeat of the 4.74km Great Orme stage.

But once the event got into the forests on the famous 15.77km Clocaenog stage, the pair dropped back down the leader board in wet and muddy conditions that were made even more treacherous in the dark.

Reeves was 10th on the stage, and finished the day in eighth place, 1m26.2s behind Breen.

“We really enjoyed the tarmac stages, although it was very greasy,” Reeves said and the end of the day.

“However, stage three was very, very wet and slippery. It was foggy in places as well, so it wasn’t the best finish to the day.”