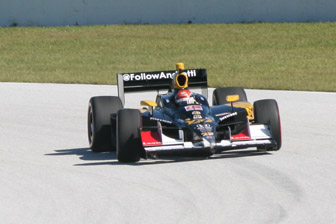 James Davison in the Andretti Autosports IndyCar at Palm Beach

Having been out of a regular motorsport competition for two seasons, Davison said that once he got back into a racing rhythm, he improved significantly throughout the day.

“I adapted to the car very quickly. I didn’t feel the braking or g-forces to be overwhelming and just continually got quicker and quicker as the day went on.

“I worked very well with the engineers who were complementary of my performance.

“The only challenge for me was that I’ve been out of a race car for such a long time. It took me about half the day to reacclimatise myself. That was really the only challenge. As Mark Webber says, “the best gym is in the car.” “I’m just very thankful to Michael Andretti and the whole Andretti Autosport team for giving me the opportunity.”

Davison will now head back to the Andretti Autosport base in Indianapolis where he will debrief with the team’s engineering staff early next week.

He says that if a race seat at the team is not available for the 2012 Izod IndyCar Series, he may be in contention to fill a test-driver role.

“The team has said that it is 80 percent of the way to finding a budget for a third car, and 60 percent to a fourth car,” said Davison.

“It will be all about timing, and that’s been against me the last two years.

“If there’s no racing opportunity, I might have a testing opportunity. With the new chassis and engine regulations coming in, there could be an opportunity to do some testing, if a race seat isn’t available.

“Today has been very good for taking the next step in my career. It was all about ticking the right boxes, not making mistakes, not damaging the car and improving as the day went on. I’m very pleased with how it went.”