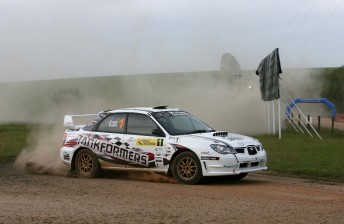 Simon Evans has won the opening heat of Rally Victoria in the Latrobe Valley, the final round of the Bosch Australian Rally Championship.

Evans, who is making a comeback after sitting out the previous events of the 2011 season, bounced straight back to the top the of time sheets 10.8 seconds ahead of Ryan Smart.

“We should have won last year but for a problem on day one, we got through today without any worries and had a solid heat win,” said Evans.

“The aim is to do it again tomorrow.”

The championship is a battle between Queenslander Smart in his Toyota Corolla and Victorian Justin Dowel driving a Mitsubishi Evo.

Dowel’s chances of catching Smart in the championship were dealt a blow in the second stage of the day when he ran off the road and lost close to 30 seconds.

“It’s pretty relaxed, we did what we had to do, put some pressure on Justin today and he stuck it off on the first stage,” said Smart.

“We beat him on the rest of the stages and that proves that we’re fast which is what I wanted to do, I want to beat those guys.

“If we win tomorrow and Justin finishes second we will win the Championship, we just have to do the same as we did today.”

Smart has a seven-point advantage heading into tomorrow’s final heat.

After his victory in the previous round at Rally Australia in September, Queensland Mitsubishi driver Steve Shepherd was again close to the front runners to finish the heat in fourth place 31.5 secs behind Dowel.

Victorian Mark Pedder was the other contender for the Championship but his chances evaporated at the end of the third stage when his Mitsubishi retired with mechanical issues.

Leg 2 features eight competitive stages over more than 135 kilometres in the forests through the Great Dividing Range around Powelltown east of Melbourne.

Video Highlights from the opening day of Rally Victoria