Dumbrell: I won’t do a Kyle Busch on van Giz

Dumbrell: I won’t do a Kyle Busch on van Giz 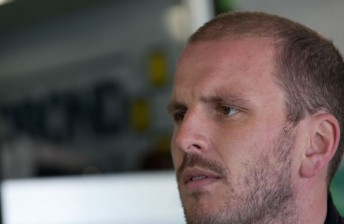 Paul Dumbrell has insisted that he will not let his rivalry with Shane van Gisbergen ruin a potentially successful weekend for The Bottle-O Racing Falcon at the Falken Tasmania Challenge.

Dumbrell, who will retire from full-time driving at the end of this season, recently said that van Gisbergen was one of several drivers on his retribution ‘hit list’ following a practice incident between the pair at the Armor All Gold Coast 600.

Dumbrell and van Gisbergen were first and third fastest respectively today in practice at Symmons Plains, leading to an awkward meeting between the two Ford drivers in the afternoon’s press conference.

The Autobarn Brands CEO assured the media after practice that he will not mirror the actions of NASCAR star Kyle Busch, who was heavily punished by NASCAR for deliberately crashing rival Ron Hornaday out of a Camping World Truck Series race last weekend in Texas.

“I’m not going to throw away a good result to settle a score,” said Dumbrell.

“At the end of the day I’m a person of integrity, and I’m not going do something like Kyle Busch and turn him (van Gisbergen) around coming into the pits – that’s just stupid.

“I was certainly heated after the incident in practice at Indy, and I had a conversation with Shane and told him what I thought. I stand by what I said – I’m not going to be pushed around.”

Dumbrell went on to further emphasise the importance of leaving his full-time stint in the category on good terms.

“I’ve openly said that Shane has achieved more in the sport than me, he’s won more races and he’ll continue to win more races,” said Dumbrell.

“But if the FPR cars can show the same sort of speed that they did today and at Indy then it (the rivalry with van Gisbergen) won’t be a problem.”

Van Gisbergen deflected questions about the situation in the press conference, underlining a previously stated desire to do his talking on the track.

“I’m not worried about it. I obviously read the comments and watched the video show, and it’s hurtful being called that stuff in public, but I’m just getting on with doing it on the track,” said van Gisbergen.

“I agree with what Paul said, you don’t want to be pushed around, but you’re not going to out of your way to hit someone.”