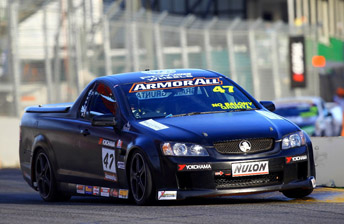 Two-time Bathurst 1000 winner Tony Longhurst will take the reins of the Auto One Wildcard Ute in the penultimate round of the Auto One V8 Ute Racing Series at Sandown Raceway.

It will be the second time that Longhurst has competed in a V8 Ute having raced in 10 Years of Legends race in 2010.

In the Legends event, Longhurst drove with reigning V8 Utes champion Grant Johnson, who is happy to be racing against his former co-driver.

“I’m looking forward to catching up with him again. He drove well when he raced with me so it will be great to race against him.”

After his yearlong break from motor racing, he’s looking forward to getting back behind the wheel.

“I think it will be a lot of fun racing the Auto One Ute,” Longhurst said.

“I had an overdose of racing after doing it for 20-25 years. I’ve got a new lease on life now and it will be great to have a run again.”

The last time Longhurst raced at Sandown was in 2007, when he filled in for Mark Skaife who was ruled out due to appendix surgery, and drove with Glenn Seton in a Commodore.

Longhurst won his first Bathurst 1000 in 1988 with Tomas Mezera in a Ford Sierra, and again in 2001 with Mark Skaife driving for the Holden Racing Team. He is one of only three drivers in the V8 Supercars era to win Bathurst in both a Ford and a Holden (joining Craig Lowndes and Steven Richards.)

Longhurst claimed another Bathurst win in the 2009 Bathurst 12 Hour with Damien White and Rod Salmon in a Mitsubishi EVO X.

In other V8 Utes news, Victorian Sean Carter will make a return to the field in his No Limit Energy Holden, while Queenslander Kris Walton will make his debut at Sandown in the Rod Dawson owned Ford.