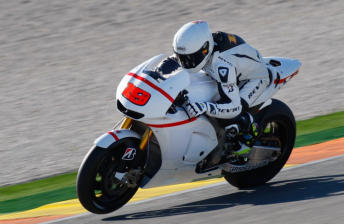 Bautista has left the factory Suzuki team and has already tested the new Honda RC213V at Valencia (pictured).

“He is a very fast rider and I hold him in high regard for his personality and pleasant nature too.

“I am sure he will integrate into our group swiftly and that we will enjoy some notable experiences together in the future.”

Bautista rode with Rizla Suzuki for two seasons and while he is excited to start a new chapter in his career, he said that he was upset to leave Suzuki.

“I am very sad to be leaving Suzuki after the two great years that I have had here,” he said.

“It has been a great team to work in and I have learnt a lot of things from everyone in the team. It was a fantastic experience working with an English/Japanese team and we have become like a big family, except we have never had any arguments and no-one falls out with each other.”