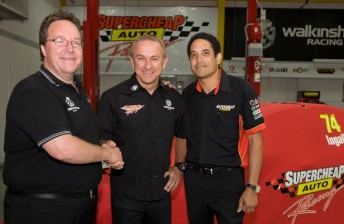 Walkinshaw Racing has confirmed that Russell Ingall will join the Clayton based squad for the 2012 season.

The 2005 V8 Supercars Champion moves across from Paul Morris Motorsports, and will continue to enjoy backing from Supercheap Auto.

The automotive parts retailer will sponsor the renumbered #74 Walkinshaw Racing entry as part of a new ‘multi-year’ deal.

Ingall has not won a race since the 2005 season, but believes he will have the opportunity to do so next year.

“For me, I have raced against the Walkinshaw teams for many years and, to be honest, I hated them – if it wasn’t for them I would have won three more championships,” said Ingall.

“At the same time, I’ve always had the utmost respect for the organisation and how it goes about its business of winning races – I am truly honoured to be joining such a professional racing team.

“I’ve always said I am not in the sport to make up numbers. I enjoy racing hard and winning. The winning has eluded me for the last few years and I want to get back into the habit.

“With today’s announcement, Supercheap Auto and Walkinshaw Racing are giving me a fantastic opportunity and I know I have the drive to make 2012 a great success.”

“We recently took a review of our business and made a number of changes which have already produced positive results, including a win in last month’s Supercheap Auto Bathurst 1000,” said Henry.

“Our new agreement with Supercheap Auto is part of our commitment to build stronger commercial partnerships and I believe this will set a benchmark within our company.

“Russell Ingall is one of the superstars of V8 Supercars, a hard-working, unique, tough-as-nails character and a true fan favourite.

“He has experience that just cannot be bought and will be a valuable addition to our team. We are delighted to have him on board.”