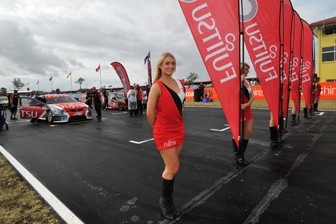 Fujitsu General will end its title sponsorship arrangement with V8 Supercars’ Development Series at the end of this season.

After six years as the major backer, the air conditioner company has decided to end its association with the series.

Fujitsu will remain involved in V8 Supercars through its sponsorship of Garry Rogers Motorsport and Development Series river Scott McLaughlin.

V8 Supercars says that it is currently in negotiations with Fujitsu regarding its future involvement with the organisation, but confirmed it will soon announce a new sponsor for the Development Series.

“Fujitsu is finalising its sponsorship arrangement with V8 Supercars for 2012 and beyond,” a V8 Supercars spokesperson told Speedcafe.com.

“V8 Supercars will confirm a new sponsor for the Development Series in the coming months.”

In 2005, the Holden Performance Driving Centre took out a one-year deal as the title sponsor before Fujitsu stepped in, remaining in place for what will be six-consecutive years at the conclusion of the 2011 season.