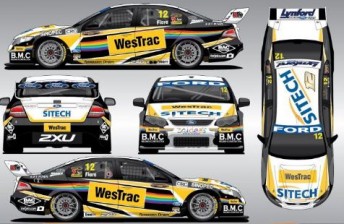 Dean Fiore’s Triple F Racing Falcon will sport a tweaked livery at this weekend’s Falken Tasmania Challenge in the name of charity.

The car will adopt a rainbow graphic in support of Zaidee’s Rainbow Foundation, in addition a Zaidee decal on the front-bar.

The foundation exists to raise awareness for organ and tissue donation in Australia, and was founded following the sudden death of seven-year-old Zaidee Rose Alexander Turner in December 2004.

Zaidee was the only Victorian child to donate her organs and tissues in 2004 – a decision that mean she was able to save or improve the lives of up to seven other people.

Dean Fiore will also wear the Zaidee’s Rainbow Foundation’s Rainbow Shoelaces throughout the Symmons Plains weekend, which kicks off three days after what would have been Zaidee’s 14th birthday.

Fiore currently sits  27th in the 2011 V8 Supercars Championship standings after 12 of 15 events.