Rookie Superbike racer Troy Herfoss believes second place in the QBE Australian Superbike Championship is within reach, but knows he will face a titanic battle in the following fortnight to steal it, starting this weekend in Tasmania.

The Team Suzuki rider heads to Symmons Plains in fourth place, a commendable result in itself given his limited time to adapt to the 1000cc machine after stepping up as Supersport 600 champion.

Herfoss, 24, admits a mid-season loss of direction was disappointing, but is confident that recent form, including two strong results at the Phillip Island MotoGP supports, has him well-placed to challenge for the runner-up position.

Given the pace of rival riders at the 2.4km circuit earlier this year, he knows the task will be anything but easy.

“The race at Symmons Plains in February was unreal, it was probably the closest race I have ever been involved in,” said Herfoss.

“I expect the pace will be just as quick, if not quicker, this weekend.

“I’ve added some strength training along with interval work to make sure I can run at the front and don’t fade in the final few laps. 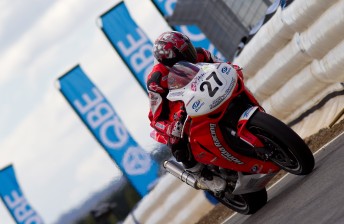 “When you’ve done a good lap around Symmons Plains, you know it. There’s no rest, despite the long 280km/h straight – it’s a wrestle from start to finish.

“I lost my way a bit at the mid-point but I think we’ve turned a corner. Wet or dry, I love the track and can’t wait to put in two strong races.”

Herfoss is 11 points shy of his goal of runner-up in the 2011 championship.

Current second-placed rider Jamie Stauffer will face the challenge of attack and defence this weekend.

The Team Honda rider can still snatch the title from runaway leader Glenn Allerton, but will need a perfect run of race results in the final stages of the eight-round season.

Stauffer, a two-time ASBK champion, will also have to keep a close guard on second, with the likes of Herfoss, Craig Coxhell, Wayne Maxwell and Josh Waters all within striking distance.

“At this stage what happens in the championship is ultimately up to Glenn,” said Stauffer.

“I can’t change what happens, all I can do is go out there and try and get the pole and race wins. The bikes on the grid at Symmons Plains earlier this year

“At the same time I have to be thinking about second. Wayne and Troy were both really strong at the Island, and Josh set the lap record at Symmons Plains earlier this year so I know he will be fast.

“I’ve got no doubt Team Honda will be up there at both Symmons Plains and Phillip Island, everyone is determined to round out this year on a high note.”

February’s fierce battle at Symmons Plains saw the top five riders trading lap times within four-tenths of a second, a trend that looks set to continue this weekend.

A clean sweep of Prostock Cup proceedings at Queensland Raceway has BMW rider Linden Magee poised to wrap up the three-round title this weekend.

Prostock competitors will feature in the combined grid race, and Magee will be hoping to hold off Team Suzuki’s Brodie Waters in the race to the chequered flag.

Competitors will hit the track on Friday for a series of practice sessions before Qualifying on Saturday to determine the order for the exciting Superpole shootout.

Saturday and Sunday will each feature a 16-lap race, with a maximum of 25 valuable championship points on offer for each.

Following the Symmons showdown, riders and teams will head straight to Phillip Island for the season’s Grand Final which will feature multiple motorcycle race disciplines on bitumen and the grass track.