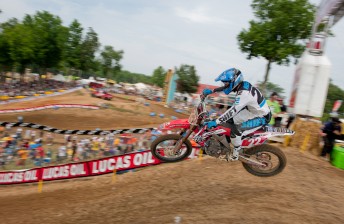 Chad Reed aims to fly high with American Honda in 2012

Motorcross rider Chad Reed has announced a partnership with American Honda for 2012 and beyond.

The Australian, who started TwoTwo Motorsports from scratch just 12 months ago, has welcomed the consistency that would come from multiple years with the manufacturer.

“In some ways this feels like redemption,” said Reed.

“In the beginning the support from American Honda was limited, which was completely understandable given we were a new team without any runs on the board.

“Our new relationship with American Honda holds so much potential and for me it is money can’t buy partnership to be associated with a manufacturer that is as equally committed to winning as we are.”

TwoTwo Motorsports will now have access to a myriad of resources, from design to manufacturing, with the team to be housed at American Honda’s Californian Racing facility, directly next door to the Factory Motocross team.

“We are very excited to have TwoTwo Motorsports continue with Honda for 2012 and 2013,” said American Honda Race Team Director Ray Conway.

“Chad enjoyed a tremendous level of success in 2011, his first year ever on Honda CFR450R racing machines.

“We are all anticipating that his level of success will only increase during the coming year as he and his team continue to build on the great foundation they’ve already established.

It was expected the announcement would include a second rider, but Reed opted to recruit two key personnel to TwoTwo Motorsports for 2012. Renowned motorcycle engineer Mike Gosselaar has joined the team as Technical Director and Sergio Avento has taken up the role of Research and Development Manager.

After working with Reed in 2009 Gosselaar said he was looking forward to teaming up with the Australian again.

“It’s a great feeling to be part of this program knowing we’re growing into becoming one of the top premier teams,” said Gosselaar.

“It’s also awesome to be back working with American Honda again and great to be supported 100% by them. Bring on 2012.”

Reed will spend the coming months in California testing with his TwoTwo Motorsports team as they prepare for the opening round of the 2012 Monster Energy AMA Supercross Championship, which will be held at Anaheim’s Angel Stadium on Saturday January 7, 2012.