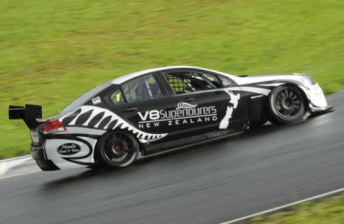 V8 SuperTourers has confirmed its tyre regulations for the four sprint rounds of next year’s inaugural series.

The soft tyres will easily distinguished with bright red side-walls.

At the first sprint round – slated for February 17-19 at Auckland’s Hampton Downs – competitors can buy two sets of softs and one set of hards.

At the first round, softs must be used at some stage during the 20 minute qualifying session. At some stage over the three races held during the weekend however, the harder ‘Prime’ tyre must also be used. When the teams use that tyre will be completely at their discretion.

At each of the three subsequent Sprint race rounds, competitors will only be able to purchase one set of both soft and hard tyres. This will mean that teams will be able to run a mix of old and new soft tyres at their disposal as well as the new hard tyres, which again must be used at some stage during a race.

V8 SuperTourers CEO Paul Radisich explained that the tyre rule has been designed to make the racing close and more unpredictable.

“The the only exception to the rule will be the intervention of the ‘Rain Gods’ which, depending on the weather forecast for both Saturday and Sunday, may throw a further curve ball at the teams,” Radisich said.

“It will not stop the cream from rising to the top but it will spice up the racing and add huge interest for spectators, as has been the case with a similar rule in Formula One.”