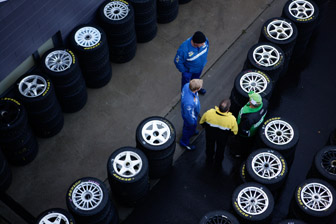 Soft tyre-only V8 Supercars events are set to be a thing of the past, according to a draft set of 2012 V8 Supercars Championship regulations issued to teams on Monday.

The proposed tyre allotment will see the Adelaide, Phillip Island, Sandown, Bathurst and Sydney events use only the harder compound Dunlop control tyre, with both the hard and soft tyres allocated for the remaining 11 race weekends.

In 2011, seven events saw only the softer compound rubber distributed to teams.

The changes are set to reduce the number of sets of soft tyres supplied to the teams for the 15 confirmed events from 66 to 43, while increasing the number of hard tyre sets from 43 to 57. The additional event on the 2012 calendar, which currently has no confirmed location, is scheduled to receive five sets of hard and two sets of soft tyres, and run a 2 x 200km race format.

While the Symmons Plains, Hamilton, Barbagallo, Ipswich, Winton, Sandown, Surfers Paradise and Abu Dhabi events all see their tyre allocation balance shifted towards the hard tyre, Hidden Valley and Townsville are expected to move in the opposite direction.

The draft regulations see Hidden Valley and Townsville both gain three additional sets of softs over that which they each received in 2011, while their allocation of hards looks set to decrease by three and four sets respectively.

The significant adjustments come despite all events outside of Sandown and Phillip Island being expected to keep their 2011 race formats.

The way the new tyre allocations will be required to be used across the race weekends has yet to be revealed.

Following the wet weather tyre shortage experienced at Bathurst this year, expect to see a limit placed on the number of wet tyres each team can purchase at the previously unrestricted Adelaide, Phillip Island, Bathurst and Surfers Paradise events.

Rules regarding pre-marked tyres, used for Thursday (where applicable) and Friday practice, are also set to change, with soft tyres no longer permissible.

For the first time, teams are expected to be able to purchase soft tyres for testing next season.

CLICK HERE for more on the revised testing regulations

See below for the complete draft of the 2012 tyre allocation