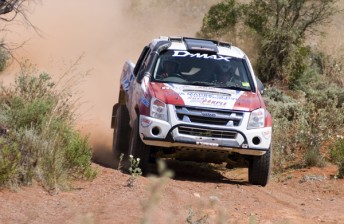 Australian Dakar Rally veteran Bruce Garland has finished on the podium in his first off-road race since fracturing a vertebra and having major heart surgery.

The Sydney-based duo has not raced since Garland fractured a vertebra during the Dakar Rally in Chile in January. Two months later he suffered a heart attack while on holidays in Melbourne and was operated on at MonashHeart, having five bypasses in the process. Since then he has been focussed on a ‘come back’.

“I’m not a star yet, but I’m definitely getting brighter,” said Garland.

“It was 40 degrees out there which meant about 48 degrees in the cabin, and that was a good test of everything – the tyres, the cooling system, and me. Everything we need to work right in the heat of a South American summer worked perfectly at Broken Hill!

“Some of the technical guys from Toyo Tyres came out with us and we did a lot of tyre testing over the weekend, and everyone’s happy with that. Obviously we would have liked to win, but in the scheme of things, finishing on the podium was a great result.”