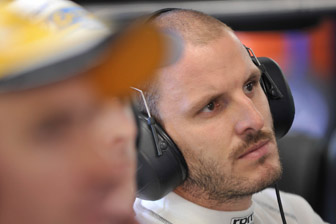 Speaking on radio program V8 Nation, V8 Supercars media manager Cole Hitchcock praised Dumbrell for expressing his displeasure at Shane van Gisbergen for a number of on-track incidents between the pair this year.

After the pair’s most recent clash in the first practice session at the Gold Coast, Dumbrell told reporters that van Gisbergen was an “oxygen thief” and vowed to ‘get even’ with the Stone Brothers Racing Ford driver.

Van Gisbergen’s only response – reported on Speedcafe.com – was that he did not want to get into a war of words through the media.

Hitchcock says that everyone benefits when drivers open up to the media about issues in the sport – good and bad.

“It’s good for the sport and it certainly creates media interest which is a good by-product for all concerned,” Hitchcock told V8 Nation.

“But more importantly, it just shows that our drivers are passionate about what they do.

“If adds a bit of human nature and humanises our guys so people are following the driver, rather than the manufacturer or sometimes the team.”

Hitchcock was a special guest on the V8 Nation radio show, hosted by V8 Supercars drivers Dumbrell and Kelly, produced by Croc Media.

For more with Hitchcock, Dumbrell and Kelly, see below for this week’s episode of V8 Nation.