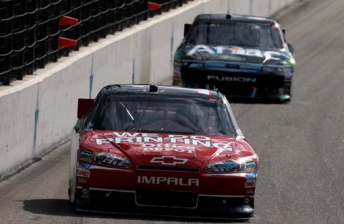 Tony Stewart has narrowed the gap to Carl Edwards in the NASCAR Sprint Cup to just three points with victory at the AAA Texas 500 today.

Stewart took the win over Edwards in a closely fought final dash to the flag, with Stewart god enough to secure a crucial win over his title rival.

The one-two result for the two leading Chase contenders means that it is highly likely that either Edwards or Stewart will be the new Sprint Cup champion – ending Jimmie Johnson’s five season reign.

It was Stewart’s second win in a row, his fourth victory in the Chase and the 43rd of his career.

Kasey Kahne finished third, ahead by Matt Kenseth and Greg Biffle and the Hendrick Motorsports pair of Jeff Gordon and Dale Earnhardt Jr.

Stewart led the majority of the race before Joey Logano’s Toyota dropped oil on the back straight on Lap 261 of 334, causing the fourth caution of the race.

Edwards, Stewart and the five cars behind took right-side tyres only on Lap 263.

Edwards got a huge jump on the restart on Lap 267 and pulled away to a lead of more than one second before the fifth and final caution on Lap 270 for debris in Turn 3.

The first 13 cars stayed out under the yellow, and Stewart stayed with Edwards on the restart, moving around the No. 99 Ford to the outside to hold on for the win.